I have multiple instances of knowing nothing. In fact, as I typed that sentence, a detailed list of all the nothings that I know popped into my head. Maybe I should just declare myself an expert of knowing nothing and allow that to be my area of study. Knowing a lot about nothing is something, isn’t it?
I’ll just keep telling myself that.

I know nothing about how to fix the engine on a car, how an airplane actually flies in the air, how to make flan, and how to behave correctly in a whole slew of social interactions. The list goes on.

In this current instance, the thought that “I know nothing” flitted into my mind as I was handed my study guide for a political science class that I took because my friends were taking it and all my other classes were wait-listed.

Let’s just say if the readings and I aren’t friends. We aren’t even acquaintances. But we’re not enemies, either. That would require us spending some time together. I would say if they were to be classified with my familiarity of them, I could boast the fact that I know in general of their existence.

One of the reasons that I am on such a distant level of acquaintance with my readings and know nothing is in part due to a character who also apparently knows nothing.

That is correct, ladies and gents – er, lords and sers…? Uh, peasants? I’m talking about Game of Thrones.

When I could have been responsibly completing my readings on time, I was watching this show.

When I could have been eating meals at a normal hour, I watching this show.

When I could have been sleeping at three in the morning, I was watching this show.

When I could have been exploring the outside world, I was watching this show.

Basically I was watching this show until there was no more show to watch.

I’ll not touch upon how sad that is and how people entertain themselves is slowly progressing from actual conversations to solo binge sessions in front of a computer screen (hey look, I just did.) That’s a topic for another day.

What I will touch upon that I’ve already touched upon is that I have wasted my time so successfully that my midterm is now two days away and I have 300 pages of reading to wade through.
But.

I can honestly say that when I debate in my head whether or not I made a good choice to “waste my time” watching, I can’t decide. On the one hand, the thing that I’m getting graded on was shoved into a sad little corner. But on the other hand, I have a complex, cinematically and authorially brilliant storyline tucked away in my mind to watch and draw upon whenever I so choose.

As a creative writing major pursuing some sort of job in the entertainment industry creating stories, I actually think that that matters more. Yes, parents and teachers everywhere who are likely shaking their heads, something that I don’t get a grade on allowed me to learn more on something that did.

For instance, in a job interview, am I going to impress someone more by telling them what happened in the August Revolution at 1945, or that I can recite most of Peter Dinklage’s epic lines?

But it depends on who you ask, and the people who I’d be asking would side with the former option. I know that colleges are seeking to churn out “well-rounded students,” but I feel like we are too well-rounded. We are becoming jacks of all trades and masters of none. If everyone was simply extremely good at the field they chose, would it really matter if I know how to speak Spanish (or at least, passed three semesters of it), can graph a parabola, and know my basic philosophy?

Perhaps I have a point, or perhaps I’m just preparing myself for the dismal grade I am about to receive on my midterm. But I’ll have the thought of the fast approach of season 4 to cheer me up.

And here for your own enjoyment and procrastination are more hilarious pictures of Jon Snow looking sad and not knowing things. (The last one’s just really sad for other reasons though :'[)

Scratch that title. I live in southern California. Skies are blue right now. With the sun shining, and birds singing, and big puffy white clouds and all. So why are people behaving like the heavens have opened up and fire and brimstone are raining down upon us?

Oh, right. The dawn of finals week is upon us. I fully realize that this is a stressful time for everyone, myself included, and I’m not trying to detract from that at all. School is important. You all have your right to feel stressed out, maybe allow yourself one emotional breakdown or personal box of Krispy Kreme donuts. But why do we all have to act like the world is ending?

The first thing to start is people whining about how atrocious their week looks and how their life is now over because they have to take their exams. I almost want to de-activate my facebook around this time. Not only would it probably help me stay more focused on my own finals, but I would be free of the posts visually assaulting me with complaints about how Jenny is feeling stressed so she ate three pints of ice-cream. 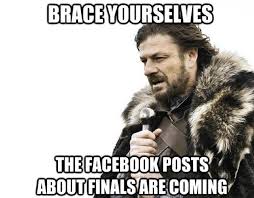 I have heard not one, but multiple people saying that they will “literally die” from the amount of studying they must do. Please, someone tell me if studying can actually kill you, because if that’s true, I’ll stop right now. But in the meantime, I’ll just pray that my books don’t suddenly gain sentience and attempt to beat me to death.

I would also like someone to explain to me how difficult it is to put on real clothes. When I get out of bed in the morning, I put my legs in my pants one at a time. I pull them up and use a zipper. Maybe carpal tunnel syndrome is plaguing more than 50% of the female population at my school, but I didn’t even see this many yoga pants in my actual yoga class. I also do not find putting on shoes a particular hassle, but it seems like my entire college has forgone the arduous task of lacing up their footwear and opted to don slippers in their time of need.

I understand people need to complain in order to vent. If we didn’t, we might explode. But please, let’s gain some perspective here. We knew what we were signing up for when we were going into this. We saw our syllabus on the very first day of school. We chose to go to college. So please, don’t act like life as we know it is over. I’d hate to see how you react if it actually was.