When people ask, “Hey, where’d you get your shorts?” I no longer hesitate to tell them that they’re straight from my mom’s closet, and straight from the 90’s.

Maybe she was holding on to her 1992 high-waisted levi’s shorts and tie-up crop top because she knew the 90’s would come back eventually, but it’s really probably because she doesn’t want to let go of her supermom glory days.

Well, mom, your supermom glory days were never gone, and now they can return in full swing because the 90’s are indeed back. That being said, while I’ll sneak out of the house before she realizes I’m sporting her clothes, there’s a few things hanging the closest from days of old that are more “as ifs” than totally fly, yo.

Julia Roberts is showing off the less is more look straight from 1990 –  but I’d believe it if it someone told me that she was walking up to her latest movie premiere in the stripy ensemble.

Speaking of high-waisted, it’s nearly impossible to walk outside and not see someone sporting the wildly popular fashion trend. Is nothing new? High-waisted shorts didn’t start in the nineties (according to a search on the all-knowing expert that is Google, and my secret viewership of basically every I Love Lucy Episode), but people certainly did wear them frequently.

However, if you’ve heard of high-waisted shorts at all, you’ve also probably heard complaints about the minimal coverage they sometimes offer. To save your eyes I’ll spare you a picture; high-waisted shorts are only a ‘do’ if they’re done right, where people will actually be able to look at you without shielding their eyes.

OK, so a Pheobe isn’t an item of clothing obviously. But if it was it would be whimsically cool and everyone wearing it would be all that and a bag of chips. She was the master of maxi dresses, statement jewelry, and songs about cats. Sounds very 2014 to me.

There are do’s and don’ts within this blast from the past. You may have guessed that the above is a don’t. A modern rule to live by with neon is that, like with crop tops, less is more. Now it’s all about accents, like a pop of bright color on fingernails, a purse, a hair tie, or thin belt.

We’ve all heard of the fashion paradox of spending two hours to look like you just woke up and rolled out of bed. While I’m not sure that the mysterious secret behind this elusive look is one that can ever be discovered, I’m positive that one of the keys is a good “oh I just threw this on” flannel t-shirt. This is a great DIY flannel tutorial where you can take some time to look like you took no time at all.

Bonus do: Fresh Prince of Bel-Air. Need I say more? 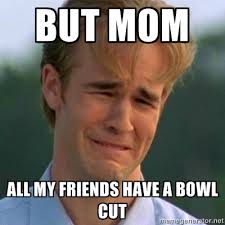 No one should walk into a salon and say “I would like it to look like there is a bowl on my head.” Apparently this happened a lot in the 90’s.

As stylishly as this model has assembled her outfit, I cannot get on board with parachute pants. There’s a reason they’re called parachute pants. Because people wear them when they go skydiving and use parachutes. Not strolling through the mall. Unless it’s SkyMall, but even then, they’re still big baggy potato sack pants.

There’s a reason even the name sounds so painful.

Overalls have been slowly creeping back onto the runways, but there was a reason that the last time I snapped on the straps to a pair was when people were still playing with Pogs. Overall, they’re a hit or a miss, but usually a miss.

5. Whatever is happening here. 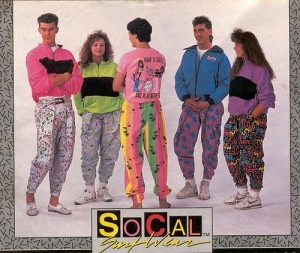